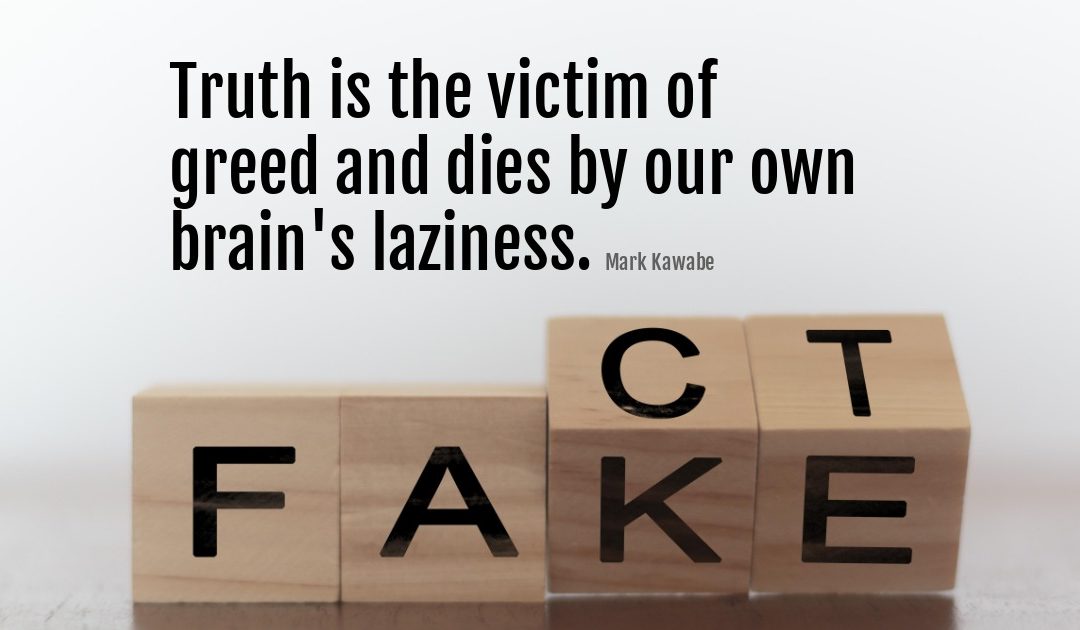 In “the good old days”, there was “truth”. Not that it was actually true, but a good chunk of people generally believed in a single narrative that was accepted as the truth. That’s not the case today.

Today’s information landscape has evolved to the point where anyone with a Twitter account can tell a fake story others will believe to be true and with a few clicks, that story will be spread around the globe and accepted as “truth”. Even if the story is subsequently revealed to be false, some people will continue to believe the fake story.

How does this happen? Largely via social media. If you were so inclined, you could create an account and start spewing all sorts of untrue things. There is no law against it. There are no policies on the social media platforms against it. There is something called “Freedom of Speech” that guarantees you the right to say things that aren’t true.

Why would anyone do this?

Simple. Because there is benefit to doing so.

Right now we’re in the midst of the Covid-19 outbreak. There are all sorts of people claiming to have miracle cures that they’re selling to the frightened. Donald Trump is putting out verifiably false information on Twitter trying to change the narrative around Covid-19. Conspiracy theorists are claiming Covid-19 is a result of the spread of 5G networks or that it is a Chinese biological weapon.

Why This B.S. Continues

Our brains don’t like to work hard so have developed some shortcuts to get things done more efficiently. You’ve heard of cognitive biases, right? These are the shortcuts our brains use to process information. I’m not going to go into them in any detail because someone else has done a really nice job of synthesizing the information. Click here for that information (external site).

In addition to our brains being lazy, we choose what we want to believe. Why? Because it fits our worldview. When we encounter information that runs counter to what we believe, it is uncomfortable to us. This is commonly referred to as Cognitive Dissonance.

Guess What Our Brains Default To

Cognitive dissonance also explains why the internet has been compared to an “echo chamber”, mainly showing us things that align with our interests and beliefs. Google and Facebook are trying to show us things we will consider relevant and useful so they curate the content they show us in the hopes it will get us to engage. If they showed us things that weren’t congruent with our worldview, we wouldn’t watch that video, click that link, or buy that product. Over the long term, people wouldn’t like those platforms as much. By showing us things similar to what they know we like (based on our browsing history etc.), they have a better chance of keeping us on their platforms.

More time on their platforms means more money for these tech giants.

Truth is the victim of greed and dies by our own brain’s laziness.

We’re now in a “post-truth” era. Nobody knows what or who to believe. We believe scientists when they come out with studies that support what we believe, but we think science is corrupt when a new study comes out that demonstrates our beliefs are flawed. It’s better to think the researchers were paid off or somehow biased in their research than to think we might be wrong.

What Can You Do?

Here are a few suggestions.

Humans have lazy brains. We take shortcuts in our thinking. This leaves us susceptible to misinformation and manipulation that can create division and weakness in our society. It is up to each of us to stem the flow of misinformation and fake news wherever we encounter it. Working together on common goals is how we will create a brighter future for everyone.